Jessie and Chris were planning their Peaks Island wedding from Philadelphia and needed some support with handling the logistics associated with their wedding day details.  Working with them was truly a collaborative effort, which I love!  It’s so great getting feedback from both the Bride and Groom on each individual subject we covered.  They both truly wanted to be a part of the entire planning process from start to finish and although they didn’t agree on everything, they both appreciated one another’s view on different aspects of the day so decisions were made with careful consideration and thoughtfulness.  The two chose to have the wedding on Peaks because Jessie’s family spent their summers there for more than 30 years, and it’s also where Chris proposed to Jessie during Labor Day weekend of 2012.  In Jessie’s words:

“We were spending the week on Peaks Island with some friends.  We had arrived a day before our friends were expected.  It was cold, rainy and miserable.  Chris kept insisting we go backshore- I was totally not into it.  I made him promise to get me a present if I agreed to go backshore!! In the end, he had been planning the best present ever- the proposal!! When he proposed, I didn’t know what to say except I was sorry for being a jerk!  Then of course I said yes!” 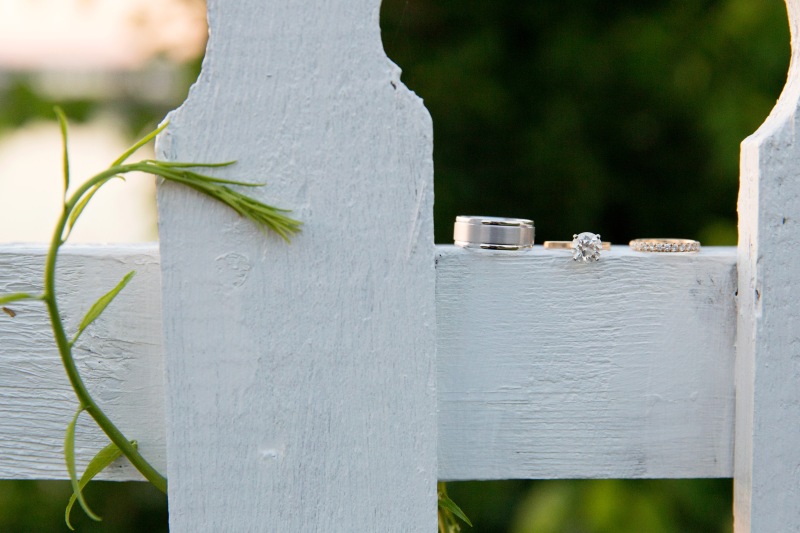 The rings were purchased at Golden Nugget Jewelers in Philadelphia. 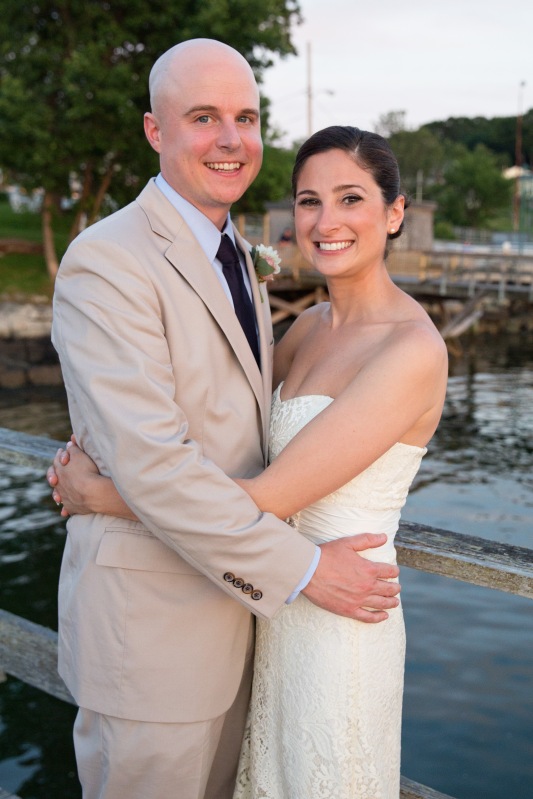 Jessie affirms the two of them are polar opposites but enjoy doing everything together, which is why they make the best couple! They enjoy volunteering their time and helping others; Jessie works as a nurse and Chris is a web developer and the founder of Philly Startup Leaders, a non-profit for startup entrepreneurs.   They also have a big heart for animals, so making sure their dog Grace was a participant in the wedding day was a no brainer!  Look at how sweet!

This gorgeous wreath (and more gorgeous flora below) was made by the talented Carolyn of Snell Family Farms. 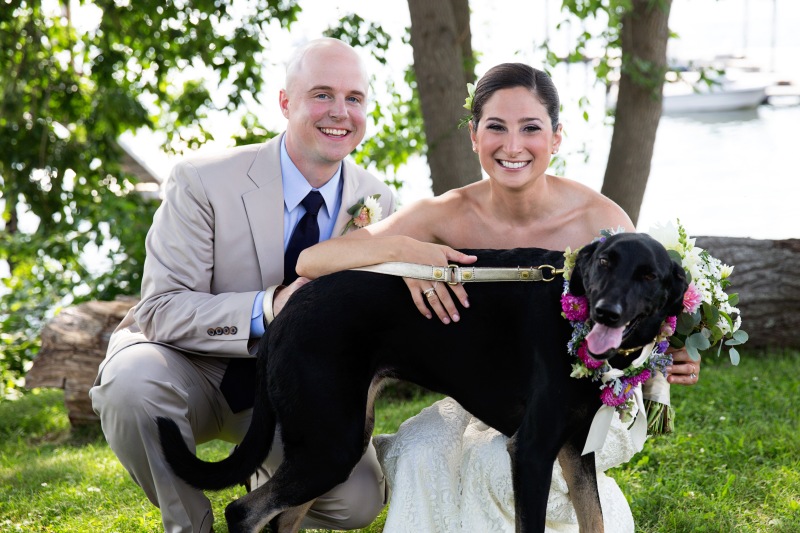 During the planning, Jessie began to collect white milk glass vases at home for her table centerpieces.  It was really important to her that her flowers were sourced locally, and her plan was to deliver the vases to Carolyn for her to design.  The beautiful pops of color from the wedding party bouquets looked even more stunning in the milky glass containers on the tables. 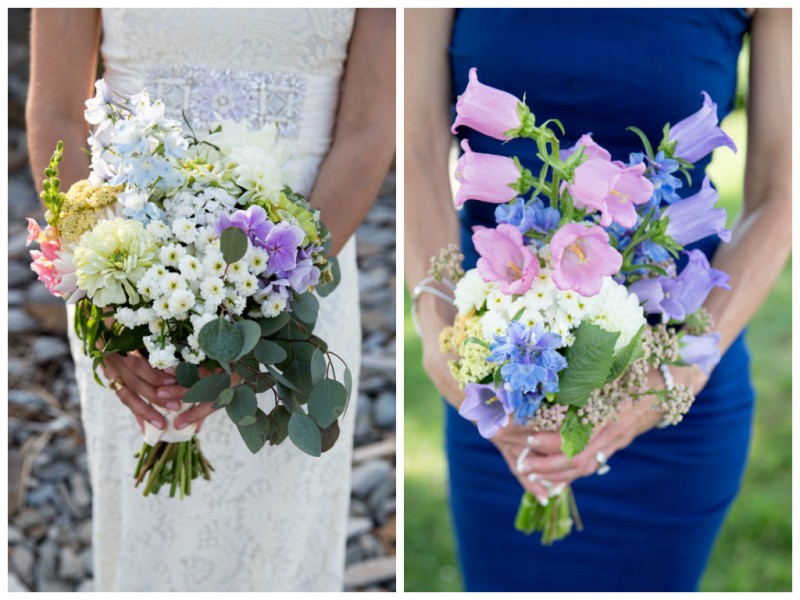 Jessie’s aunt crafted the table numbers with vintage maps of the island as a backdrop in picture frames.  The place cards were antique reproduction postcards of islands in Casco Bay.  We attached them to our antique shutter screen for guests to easily find their seat.

Jessie and Chris also personalized their wedding by combing the beach for driftwood to make beautiful directional signs for guests getting on and off the ferry.   A big thank you to Caity Gildart at Casco Bay Lines for helping me find the right spots to place them!

The day was beautiful (and hot!).  It was a perfect day to be on the island.  Guests enjoyed the short fifteen minute ride to Peaks in anticipation of the exciting festivities ahead.

All were greeted by Chris and family members, and found their seat for the ceremony overlooking the Harbor.  When the ceremony began,  Jessie’s sister in law led the processional, followed by these cuties!  The ring bearer carried the rings inside a sea shell and the flower girls had long pretty satin ribbons on their bouquets. They did great! 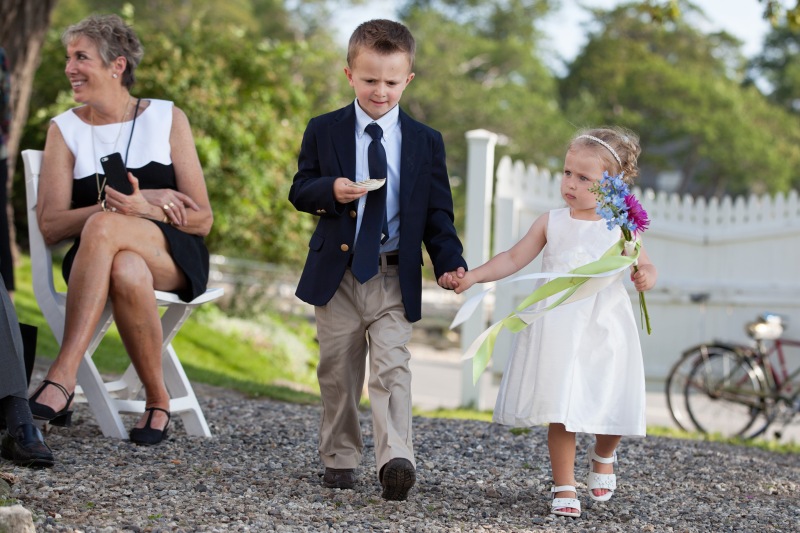 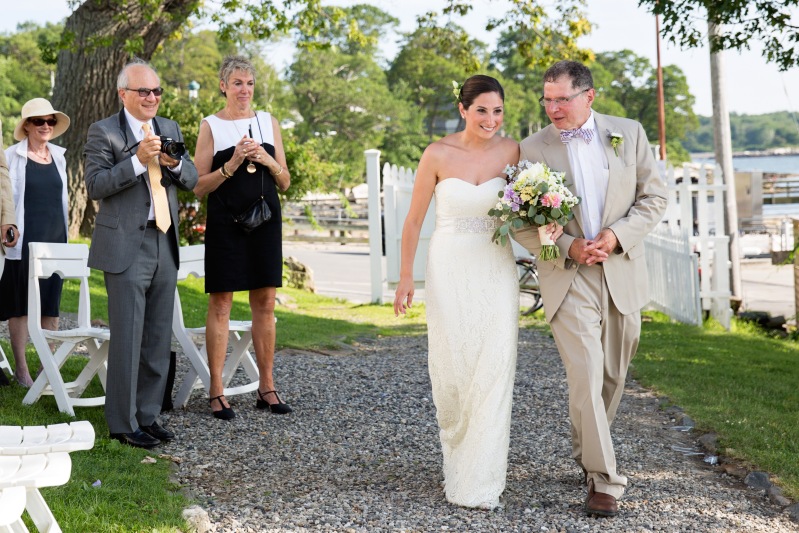 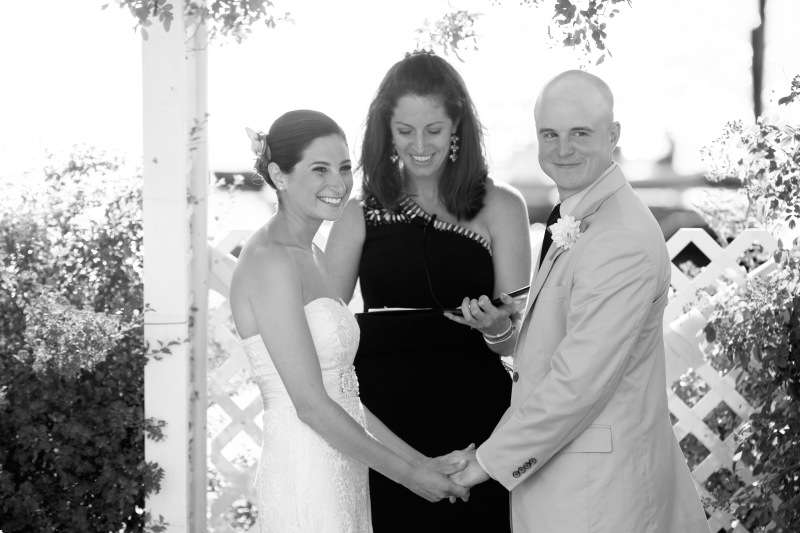 Jessie and Chris chose a close friend, Kate MacGregor to officiate the ceremony.  Another wonderful way that they personalized their day (many more of these details to come)! 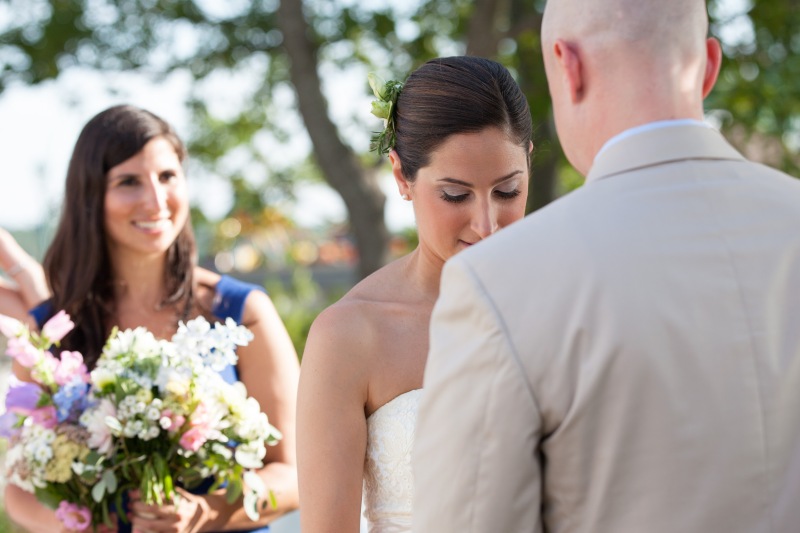 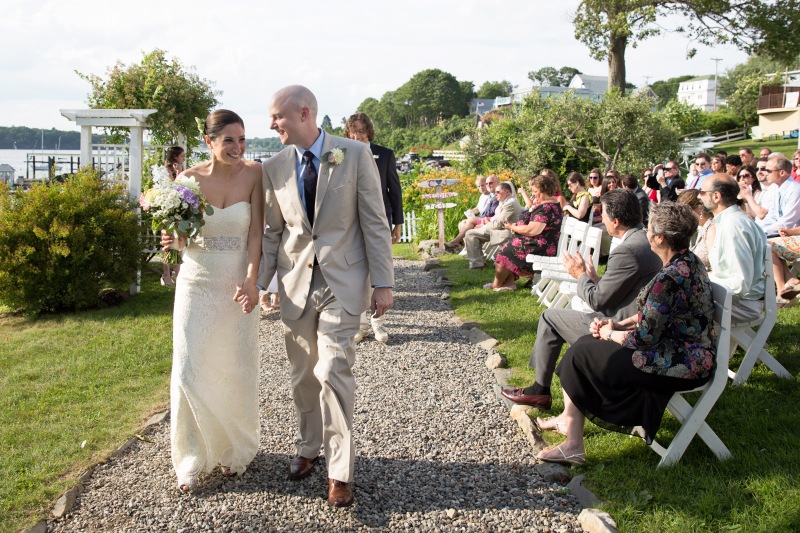 Jessie and Chris hopped in a car with none other than Kate Crabtree Photography to the same spot on the island where Chris proposed for some incredible shots…just amazing! 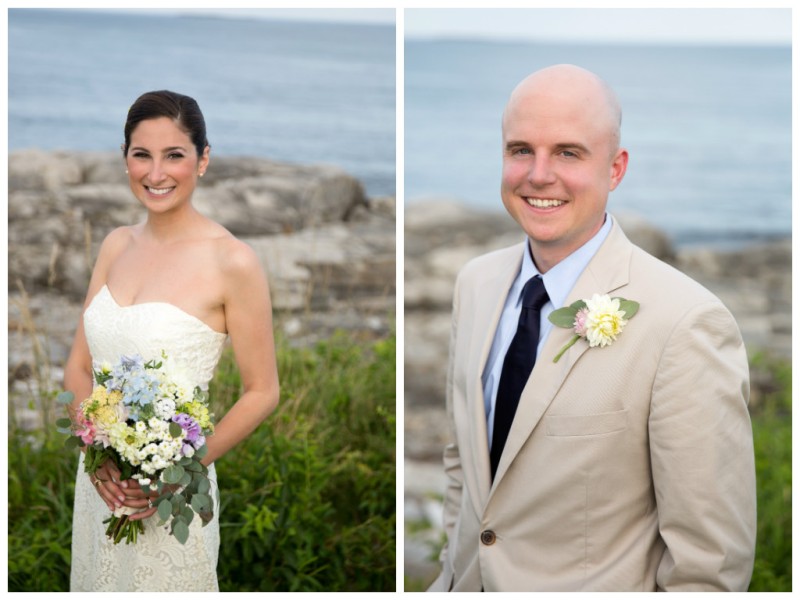 Jessie’s gorgeous hair and make-up artistry was completed on the island (smart girl!) by Lisa Nale of Studio One.  Chris’ suit was by Brooks Brothers.

The sassy Jimmy Choos were a gift from Zoe!  What a sister!  Don’t sisters usually fight over such things?! 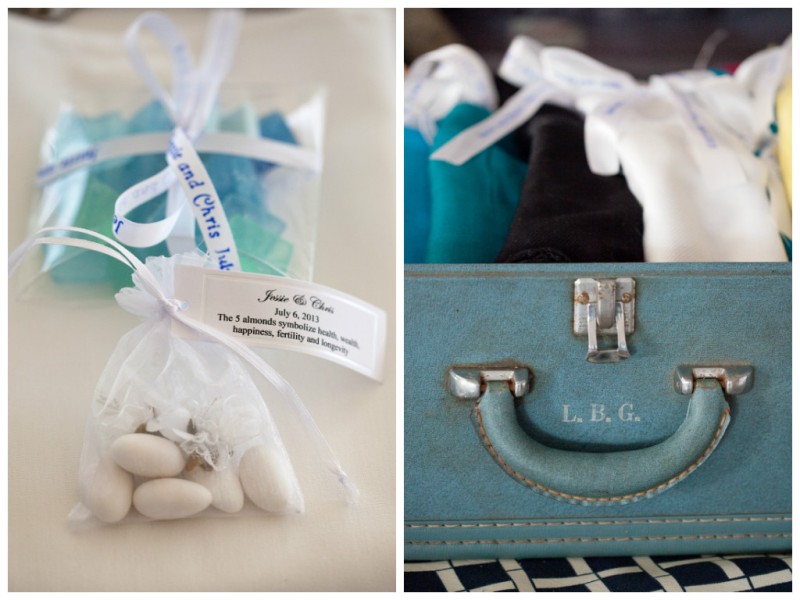 Jessie’s Mom is of Greek descent, and Jessie really wanted to bring some traditional elements to her wedding day as well.  The Jordan almonds called Koufeta in Greek were given to all of guests.  Traditionally there are always an odd number of almonds, and the Greek prefer to place five in a package to symbolize health, wealth, happiness, longevity and fertility.  Jessie also gave beautiful handmade sea glass soaps made by Savon Salon, colorful flip flops for dancing and pashminas for the ferry ride home!  Talk about generous!

We lined them up and presented them in our vintage suitcase and as a surprise we sourced some original old Peaks Island postcards to display.

After a beautiful plated dinner that began with a chilled melon soup course prepared and served by The Black Tie Company, Jessie and Chris had their first dance that kicked off a night of partying and dancing via Audible Events.  But first, check out this amazing cake Jessie’s friend Kate Hanssen made for them!  So much love from so many people! 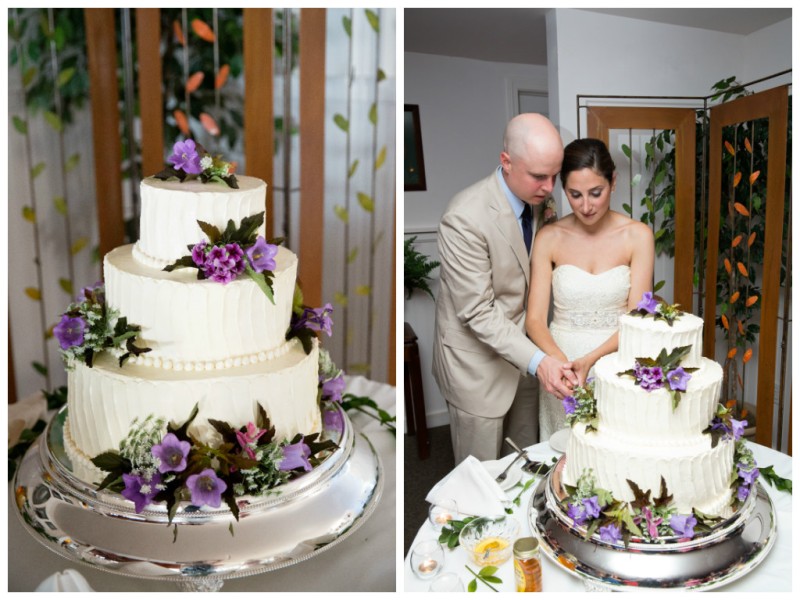 And after the cake was cut, Jessie’s Aunt and Godmother Nancy performed a blessing ceremony where she tied a piece of silk around the shoulders of Jessie and Chris.  Using the same silver spoon, first the bride than the groom is offered a teaspoon of honey and the blessing is announced: “May your marriage and lifetime together be as strong as the silk that surrounds you and as sweet as the honey you taste.”  Very special.

As the sun went down, Kate grabbed the two for some beautiful shots on the pier.

Meantime, serious dancing and partying back at the venue!

Traditional Greek dances and intense merriment ensued for the remainder of the eve! 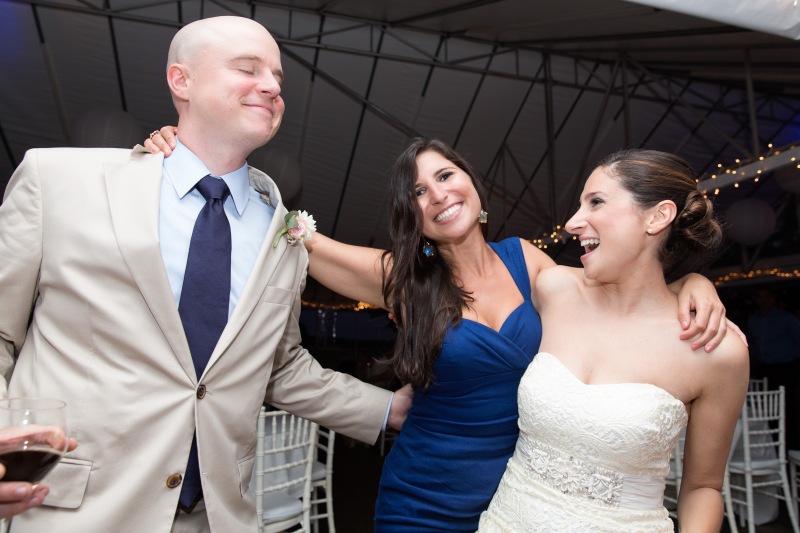 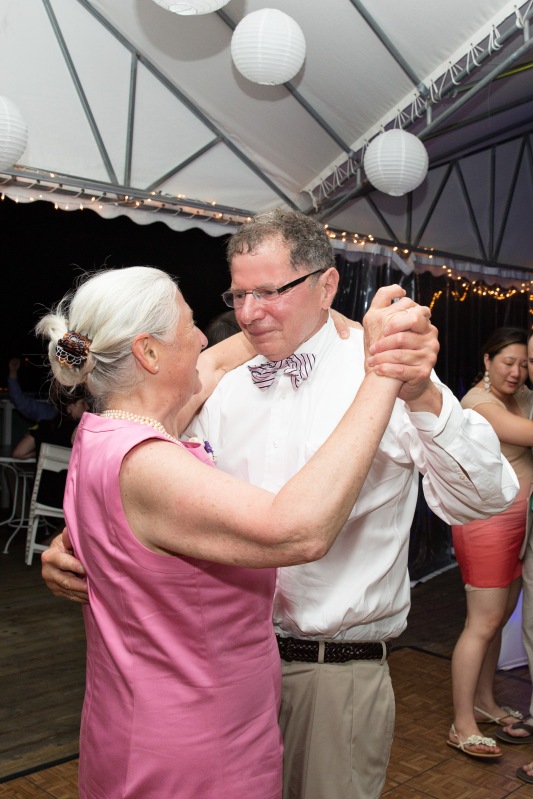 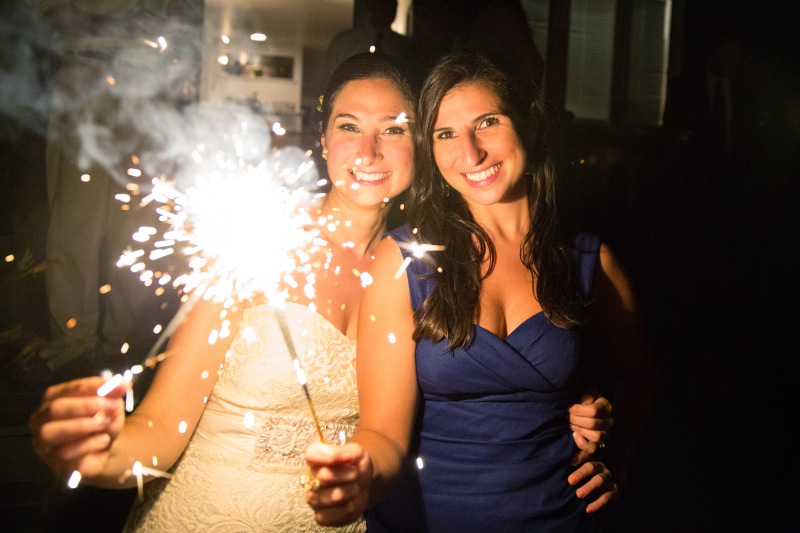 The night was made more magical with a sparkler send off as guests made the late night ferry and party goers continued in town. 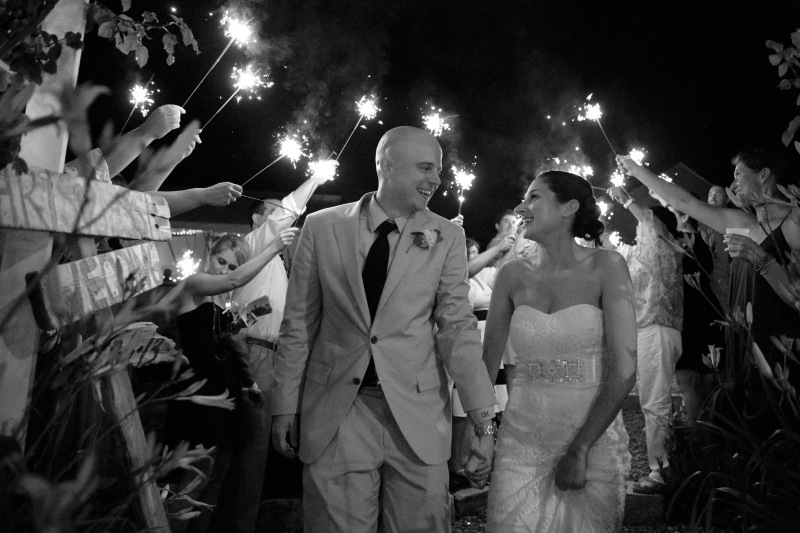 Congratulations Jessie and Chris!  Thank you for sharing your beautiful beautiful day with us, and thank you to Kate Crabtree for sharing her incredible images! xoxo

I am a passionate mother, a grateful and loving wife, an appreciative daughter, a stupendously lucky granddaughter, a very proud sister, a fortunate friend and a constant desire to live creatively, be inspired and share the love. I am also the owner and Creative Director of an event planning and prop rental business, A Family Affair of Maine. Here I aspire to share my professional experience as a party producer, host, designer, coordinator, promoter, craftsman, chef, Mom and partner in crime, not in that specific order. View more posts